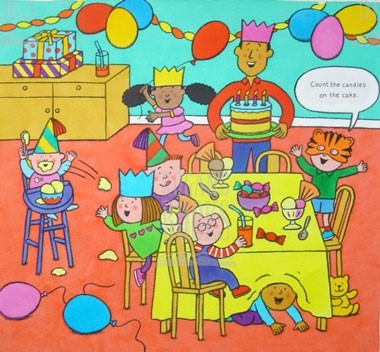 1. Julia Donaldson  is an English writer, playwright and performer, and the 2011–2013 Children's Laureate. She is best known for her popular rhyming stories for children, especially those illustrated by Axel Scheffler, which include The Gruffalo, Room on the Broom and Stick Man. She originally wrote songs for children's television but has concentrated on writing books since the words of one of her songs, "A Squash and a Squeeze", were made into a children's book in 1993.

“I opened a book and in I strode.
Now nobody can find me".

2. Oliver Jeffers (born 1977) is a Northern Irish artist, illustrator and writer who now lives and works in Brooklyn. He is widely known for his picture books for children, How to Catch a Star debuted in 2004 to critical acclaim, and Lost and Found (2005) won the Nestlé Smarties Book Prize Gold Medal 2006, the Blue Peter Book Award 2006 and was shortlisted for the Kate Greenaway Medal the same year. The Incredible Book Eating Boy (2007) won the Irish Book Awards Children's Book of the Year, and his fourth Book The Way Back Home was released in September 2007 and The Great Paper Caper was released in September 2008. Stuck & This Moose Belongs to Me were both on The New York Times Best Seller list. The Day the Crayons Quit achieved No. 1 on The New York Times Best Seller list.

"If you care too much about what others think then you ultimately become what you think they want you to be".

3. Nick Sharratt (born 9 August 1962) is a British illustrator and author of children's books, Sharratt illustrates for children's authors as well as producing his own picture books for a younger audience. Sharratt's books include Shark in the Park, Ketchup on your Cornflakes?, What's In the Witch's Kitchen?, Don't Put Your Finger in the Jelly, Nelly!, Octopus Socktopus and My Mum and Dad make Me Laugh. With Pippa Goodhart he created the million-selling You Choose. He illustrated Pants, written by Giles Andreae, and Chocolate Mousse for Greedy Goose, Goat Goes to Playgroup and Toddle Waddle by Julia Donaldson. Nick has also written two chapter books, The Cat and the King and Nice Work for the Cat and the King.

“When I was nine,” he says, “a picture that I’d drawn at school was pinned up in the hall, and the husband of one of the teachers saw it and offered me five pounds to do a similar picture for him. That’s when I decided I was going to be a professional artist one day!"

4. Anthony Browne (born 11 September 1946, in Sheffield) is a British writer and illustrator of children's books, primarily picture books, with fifty titles to his name. For his lasting contribution as a children's illustrator he won the biennial international Hans Christian Andersen Award in 2000, the highest recognition available to creators of children's books. From 2009 to 2011 he was Children's Laureate.

"Picture books are for everybody at any age, not books to be left behind as we grow older. The best ones leave a tantalising gap between the pictures and the words, a gap that is filled by the reader's imagination, adding so much to the excitement of reading a book".

"Worrying can be a kind of caring, and as such is a healthy part of a balanced emotional life".

5. Eric Carle (born June 25, 1929) is an American designer, illustrator, and writer of children's books. He is most noted for The Very Hungry Caterpillar, a picture book that has been translated into more than 66 languages. His career as an illustrator and children's book author took off after he collaborated on Brown Bear, Brown Bear, What Do You See? He has illustrated more than 70 books, most of which he also wrote, and more than 145 million copies of his books have been sold around the world.

“We have eyes, and we're looking at stuff all the time, all day long. And I just think that whatever our eyes touch should be beautiful, tasteful, appealing, and important.”

6. Emily Gravett (born 1972) is an English author and illustrator of children's picture books. For her debut book published in 2005  (Wolves) and again two years later (Little Mouse's Big Book of Fears), she won the annual Kate Greenaway Medal recognising the year's best-illustrated British children's book (no one has won three). Monkey and Me won the 2007 Booktrust Best Emerging Illustrator for children up to five-years-old.

" She has a dog that eats paper. One of Emily's previous jobs was picking potatoes. She was allowed to eat as many as she wanted!"

8. Anna Judith Gertrud Helene Kerr  ( 14 June 1923 – 22 May 2019) was a German-born British writer and illustrator whose books sold more than 10 million copies around the world. She created both enduring picture books such as the Mog series and The Tiger Who Came to Tea and acclaimed novels for older children such as the semi-autobiographical When Hitler Stole Pink Rabbit, which gave a child's-eye view of the Second World War. Born in the Weimar Republic, of Jewish background, she came to Britain with her family in 1933 during the rise of the Nazis.

"I'm terribly resistant to that. It's not a thing you should do, i never think about telling small children what to think".

9. In 2004, Kimberly & James Dean sat down at their kitchen table to work on a children’s book together. Their dream has finally become a reality with the release of this new Pete the Cat book, Pete the Cat and His Magic Sunglasses. Both left corporate jobs in the late nineties (James was an electrical engineer, Kimberly worked in the press office of the governor of Georgia) to pursue their passion for art, and they have experienced a life made up of strange and wonderful coincidences ever since. Pete the Cat has brought magic into their lives. They work in side-by-side studios, sharing their home with five cats and Emma the pug.

“The moral of Pete’s story is:No matter what you step in,keep walking along and singing your song ……because it’s all good.”

10. Anthony Ross (born 10 August 1938)[1] is a British illustrator and author of children's picture books. Ross has had many jobs, including a cartoonist, graphic designer, then art director at an advertising agency.  In Britain he is best known for writing and illustrating his Little Princess books and for illustrating the Horrid Henry series by Francesca Simon, both of which have become TV series based on his artwork. He also illustrates the works of David Walliams.

"One of the troubles with signings is that you are surrounded by children, and some of them have got colds".

look for their books at : www.espabooks.com