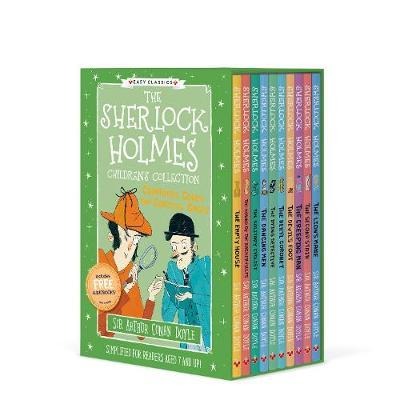 Sherlock Holmes is a character from books written by Sir Arthur Conan Doyle. His most famous story was The Hound of the Baskervilles.

He is a detective who tries to find out who did crimes. He has a sharp mind and solves even the most difficult and strange cases. He works with his friend Dr Watson, a retired army officer. Holmes plays the violin and smokes a pipe. Sometimes when he has not got any cases to solve, he uses drugs. He is very smart.

Sherlock Holmes was "born" on 6th January 1861, and for more than 100 years his name has been known in every country of the world; and not only his name, but his appearance too. The hawk-like features and piercing eyes; the dressing-gown and pipe; the funny cap and magnifying glass - these details are so familiar that if he were to appear amongst us today we should know him at once.

Dr. Watson admires Sherlock Holmes attention to detail and Holmes explains the importance of details that appear unimportant but can be crucial in solving a mystery. He is the only Consulting Detective in the world and his "science of detection" is based on analysis and deduction, figuring things out from things he already knows. He is especially good at backwards reasoning (inference or abduction). From the scratches around a front door lock, he decides the man drinks a lot; seeing the man's clothes are respectable but worn, he thinks the man was once successful, but has fallen on hard times and taken to drink. And so on.

Professor James Moriarty is Sherlock Holmes' arch enemy (chief enemy). He does bad things (crimes). He is a mathematical genius. Sherlock Holmes vs (against) Moriarty represents one of the greatest battles of wits (shrewdness, intelligence, smartness) in the history of the world. Holmes spoke often of Moriarty's genius in admiration in spite of (not considering) the horror of the crimes. He spoke well of Moriarty without taking into consideration the evil side of his nature.